My latest piece of work is this plywood turtle skull sculpture. It is inspired by a turtle skull I found on a remote beach in Cape York Peninsular, 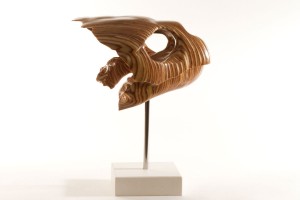 Northern Queensland, Australia while on a expedition in my early 20’s. At the time it was a very beautiful area (I hope it still is). I was the only person on this pristine, sandy, tropical beach edged with rainforest. Just me, the odd crocodile and a turtle skull. So carving this skull has brought back some very happy memories.

In subsequent years I returned to this part of Northern Queensland, N.E Australia on several occasions, and spent some time tracking and watching rainforest nesting crocodiles. One moment is lodged vividly in my memory. I was observing a large crocodile on the opposite bank of a river. The river was about 20 feet wide at this point. As I stood, watching interestedly, the crocodile gently started to slip into the river, slowly submerging itself in the water. I realised with a jolt (as the tip of the crocodile’s tail disappeared into the water) that as I had estimated the crocodile to be about 16 feet long, the large biting end of the croc was probably now around 4 foot away from the bank on which I was standing. So I made a fast, probably rather inelegant, retreat into the rainforest.

On another occasion during a month’s spell in the rainforest (again in the Cape York peninsula) I came across an area which was obviously where the crocodiles hauled themselves out of the river. Crocodiles make muddy slides and shoots where they repeatedly enter and exit the rivers. I noticed that there were quite a few of these slides at this particular point. I then noticed that the leaf litter near the bank had been turned over in various places. This disturbance looked very deliberate. It slowly dawned on me that I had stumbled upon a crocodile nesting area. This was one of the very few occasions where I can say I actually felt the hair on the back of my neck stand on end. I don’t know if there was a crocodile nearby, ready to protect her eggs, but needless to say I made another very quick exit from the area.

On yet another occasion I was hired by the Queensland National Parks Authority (partly because of my experience with big animals with teeth) to help a Park Ranger trap a large saltwater croc which had been harassing a local community ….. but I think that must be for another blog!

On my two previous trips to Africa, I have neglected to to take an item…

Humboldt is a name that we are all probably familiar with to some degree, whether it…