If you are in London end of October, you might like to visit the SWLA (Society of Wildlife Artists) Exhibition, “the Natural Eye”, which will be held at the Mall Galleries, London, 26 October to 6 November 2016.  I have had two pieces accepted for this exhibition, they are both hand carved skulls and form part of my new “Wildlife in Peril” collection.

To me skulls are very sculptural and beautiful objects.  They make us think of things long gone, (maybe lost for ever) or in the case of this new collection, creatures we might soon lose.

Harpy Eagles live in the South American jungle.  They are among the largest of eagles but have a relatively small wingspan – which gives it greater manoeuvrability in its forest habitat. They have the largest talons of any eagle, and can take quite sizeable prey –  arboreal mammals make up a large percentage of its diet. The monogamous harpy eagle often builds its nest in the crown of the kapok tree, one of the tallest trees in South America. Luckily for the harpy eagle, in many South American cultures,  it is considered bad luck to cut down the kapok tree. Status: Near Threatened. 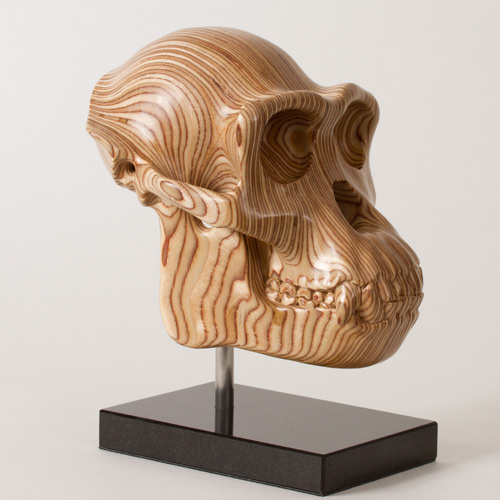 The chimp needs no introduction.  So close to us genetically that we can see ourselves reflected in its face – and skull.  Chimps are of course amazing creatures. They display emotions in a way we can relate to: tenderness, friendship – and anger. I have followed and viewed wild chimps in Congo rain forest, and have spent many days interacting with an orphaned pygmy chimp (Bonobo) in Brazzaville. Both encounters have taught me of the many similarities between us and them, as well as the differences.

The Barn Owl At this time of year dawn comes quite late, and  if a…